Sette Giugno Commemoration by the House of Representatives 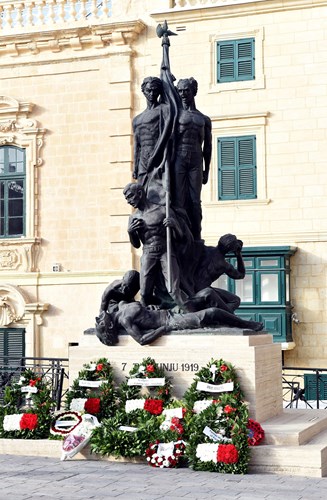 Each year the Maltese Parliament commemorates events that took place on 7 June 1919 following a series of riots by the Maltese who were facing extreme poverty arising from steep increases in the price of bread. The crowds rebelled against the grain importers and flour millers who were considered to be making large profits from the increases in the price of food whilst the people were starving. British troops were called in to control the rioters, leading to shots being fired. Four Maltese persons, Manwel Attard, Karmnu Abela, Ġużè Bajada and Wenzu Dyer lost their lives during these riots.

These events marked a crucial point in Malta’s political history highlighting the urgent need for social and economic reforms. Following these events, and efforts by the Maltese authorities, Malta was granted the 1921 Amery-Milner Constitution, giving, for the first time, the right of self-government on domestic matters.

By way of Act VIII of 1989, which amended the National Holidays and other Public Holidays Act, the Sette Giugno was made one of the five national holidays. Traditionally, this day is commemorated by Parliament with a speech by the Speaker of the House and a wreath-laying ceremony at the foot of the Sette Giugno monument. The monument to the victims of the riots was relocated from Palace Square to Hastings Gardens when embellishment works started on the Square in 2009, but was subsequently returned to its original location in 2016.

The speeches by the Speaker of the House on the occasion of the Sette Giugno, are linked below: