Speaker of the House of Representatives
Twelfth Legislature (2013 - 2017) 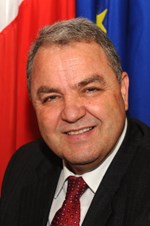